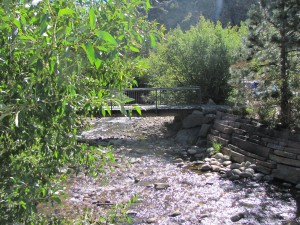 The Long’s Peak Coffee and Paper House serves the darkest, richest, Americano I’ve ever had. Every one I’ve drank since, serves only to remind me that it’s not as good as that one.

Cradled by rock, listening to the soundtrack of water over stones, I renamed the little creek running off of Sprague Lake—the  Ulysses Pool.

Shelle and I sat there for a good hour reading—though perhaps she thinks of it as Kindle Creek. 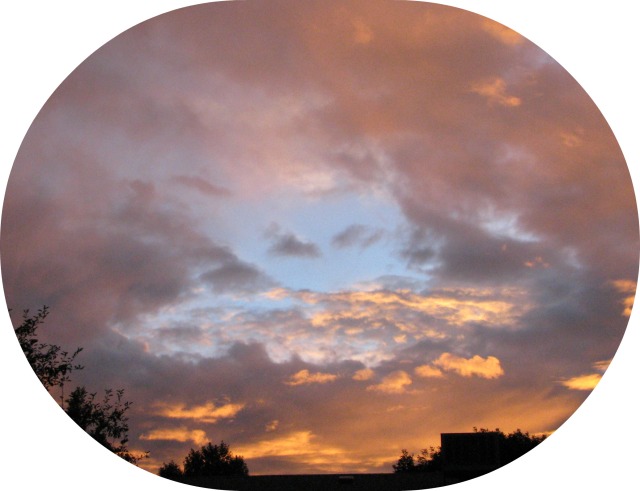 Determined to get a table, we arrived early. Before we sat down we were accosted by a very tall Scottish accent who wanted to know if there would be dancing later. 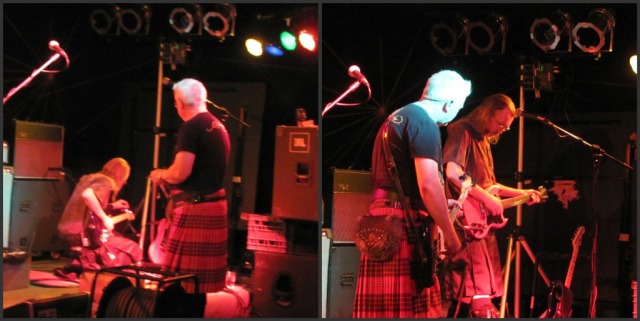 The band on stage tuning up and talking back and forth to Gusty. The tables are already full of people adorned with green wristbands. It’s a diverse crowd. Angus Mohr regulars line the sides with everyone from hipster to hip-replacement spanning the middle. The band throws down Killecrankie. The early birds tap their feet and cheer.

Steve leans into the microphone. “That didn’t count.” 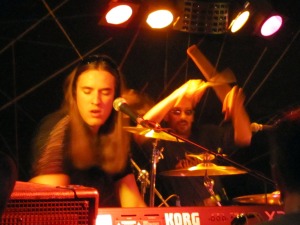 WHISKY IN THE JAR

I’d woken that morning delighted by how sore I wasn’t, having danced most of the night before. I’d credited Plum Creek’s icy healing properties. However, halfway through “Whisky in the Jar,” I realized that that kind of healing only works if you don’t come back and do the same thing a second night in a row.

As a compromise to my wailing calf muscles, I sat out the next three while I hunted for some Aleve.

TANGLED UP IN BLUE 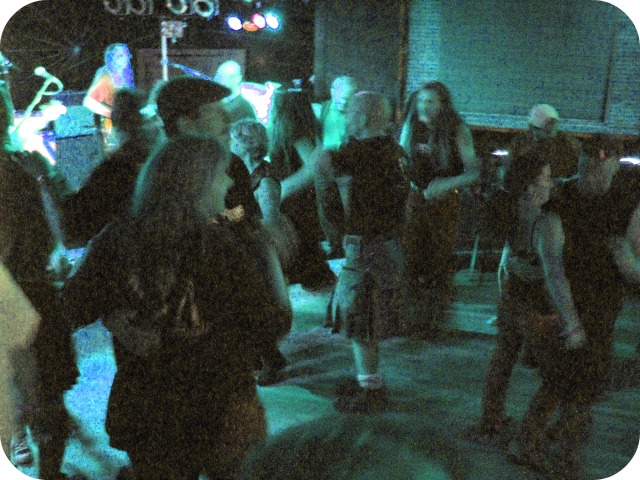 ATHENRY spins a couple—well matched and having fun—like  tops in front of the stage. Damn, I love watching people swing dance, nothing is quite as hot as swirling speed and grace matched to music. Near collisions with those less graceful and more inebriated made them look supernaturally skilled.

Before this show, I’d been working on the first Lonigan’s post and gotten stuck. (It ended up sad but started absolutely freaking maudlin.) Figured out how to fix it.

THE TIMES THEY ARE A CHANGIN’

Seriously, how can anyone sit in a chair when Angus Mohr plays this song? Once, there were dancing plagues. People started and couldn’t stop, for days, weeks, bundles of bones jerking like marionettes.  I can see how it happens. My shins’ protest lasted only as long as it took to begin. You pitch your mind above the pain, and nothing hurts—until you stop.

Why the hell did I stop? 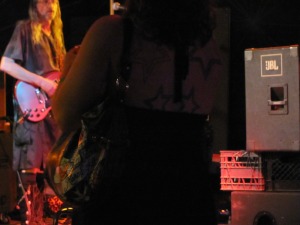 Yeah, yeah, I know, it’s Dylan’s, but when I close my eyes I always see Jimi.  When I open ‘em, I see Byrd. Since June, the rising pipes have signaled the beginning of the end, but we’re at a bar show.  Twenty minutes to cool off outside—two more sets still to go. 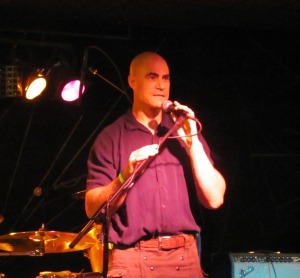 The Aleve kicked in. I swear I felt it trickle down my calves. One minute they were on fire, the next they were fine. I didn’t need my seat the rest of the night.

There are several as yet-or-never-will-be recorded songs that I crave between shows. Finding a surrogate for this song has been the least satisfying, despite the fact that a hundred other artists have recorded it.

No one plays “Shady Grove” like Angus Mohr. Good thing it’s going on the next album (or was last time we talked).

…shreds me every time. Thinking about it days later makes my toes twitch, so it’s no surprise that that’s the one that nearly made me naked in front of the whole bar. My belt broke, and I’ve lost enough weight this summer that I was one quick clutch away from a wardrobe malfunction.

Lucky for me, V had his knife. We sacrificed the tie on my journal and performed emergency- belt-loop surgery. 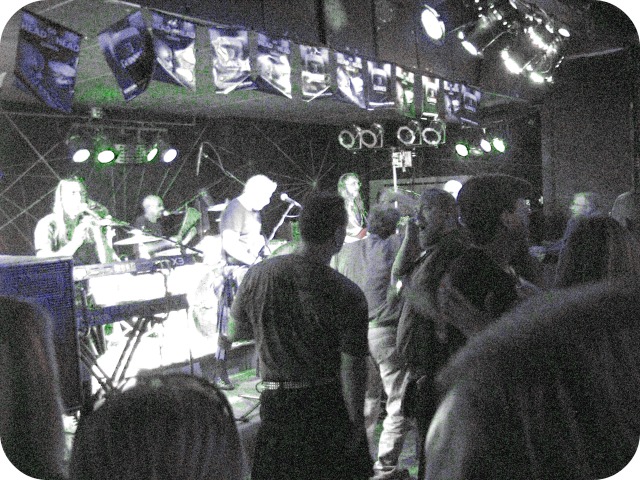 Norm looks a lot like my erstwhile-uncle Killer, except I never saw Killer have that much fun, but I never saw him singing Rolling Stones songs either.

DEBT TO THE DEVIL

Another song you probably never imagined with the bagpipes, but once you’ve heard it, you can’t imagine anything else.

It sends me back to the French Quarter, St. Joseph’s Day Parade, hanging out at the Kerry, talking Nietzsche with a guy who looked like ZZ Top’s lost member(actually a professor at MIT) while his friend hit on mine.  Three-thirty a.m. in the Montleone, waiting for my shuttle to the airport, no sleep, and writer’s group a few hours away…

Pick guitar, fill fruit jar and be [a]gay-oh
Son of a gun, well have big fun on the [d]bayou.

Paul introduces “Captain’s” with, “This is a parabolic song,” and while it was way too late for anyone to be thinking about math beyond maybe 1 + 1, the Lonigan’s inspired tune picked up the energy begun with “Rebel Yell’s” More! More! More!, and delivered the crowd into June Carter Cash’s fabled “Ring,” delirious and fevered.

The band had already started “Hard Rain’s” cooling chords when someone told Paul there was a wedding party in attendance. 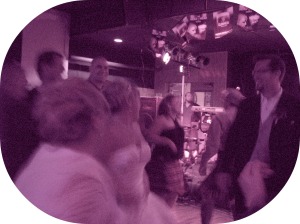 “Well, this isn’t really a wedding song, but if we stop now, it’ll look silly.” Paul said with a laugh as the groom led his bride in front of the stage. We made space, clearing to the edges for the white skirt belling across the floor. 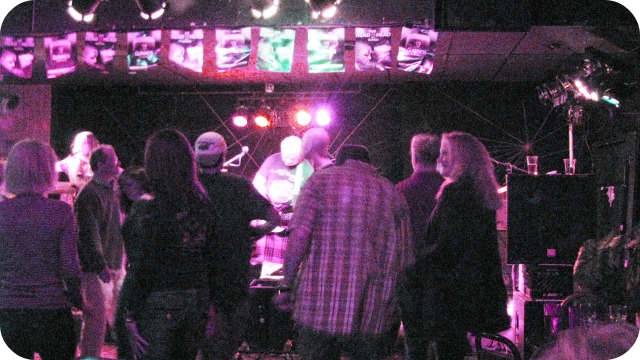 SYMPATHY FOR THE DEVIL

No notes for this set, just the crush and press of bodies, trickling sweat, and slow anticipation for each next song.

WISH YOU WERE HERE 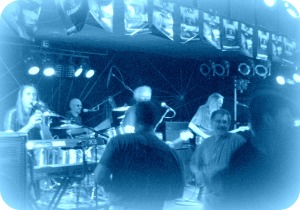 The one song I’m content to close my eyes, listen, and sway while couples kaleidoscope between shadows and colored lights.

BRICK IN THE WALL

You do too know this one. You just think it’s called, “Everybody must get stoned.”

LONG WAY TO THE TOP

KEEP ON ROCKIN’ TO THE HEART OF THE SUN 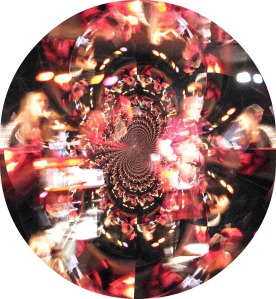 Obsession. I’ve listened to “Set the Controls…” at least fifty times since Hamilton, all to get  closer to this moment…

Little by little the night turns around.
Counting the leaves which tremble and turn.
Lotus’s lean on each other in union.
Over the hills where a swallow is resting.

Set the controls for the heart of the sun.

Their second encore still fading into the woodwork, the stage is dark, and we’re preparing to say goodbye when Matt steps into a circle surrounding the bride. He lifts his bagpipes, turns, and says, “I think I’m about to get into trouble,” and plays, one more tune. 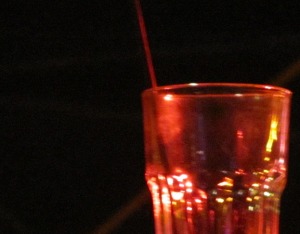