Mohr Fire Part 3: Then and Now 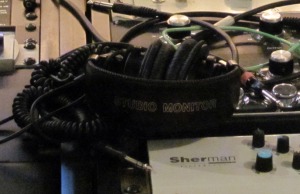 Matt says, “It seems like big business is doing the same thing to music as they did to food. It’s all generic and homogenized. You can go anywhere in the country and have your McDonald’s hamburger that’s just like every other McDonald’s hamburger. At the same time, you can hear a classic rock station that’s almost like the Fox. They might even play Lewis and Floorwax, and you’re probably not going to hear anything that you haven’t heard a hundred times before.  Sometimes, that’s ok. Sometimes, that’s just what you need. Other times…”

Matt plucks a CD off the shelf. “Have you heard this album before? It came out in 2008.” Matt slides the CD into the changer and hands me the cardboard sleeve. “It was a huge hit. Rolling Stone gave it 5  stars, [but] it sounds like shit. Everything’s compressed. The music is cool, but it’s horribly recorded, horribly mixed, horribly mastered. I mean look.” Matt points to the VU (volume unit) display, which before the Loudness Wars would have danced back and forth, but like many commercially released recordings since the mid 1990s, with this one, all of the VU’s lights are lit up, “There is no dynamic range.”

Matt gestures to the computer monitor, “[Now] You can slap stuff up for download or streaming. People don’t really listen to music in the same way they used to. We stream off of our website…”

Paul says, “But it’s not going to be the same as if you went out and bought a copy of the Ghost Ship. It’s not going to sound the same. However, if you listen to it while you’re driving, or on the latest device [through a] a cheap set of ear buds, you aren’t going to know the difference.”

Paul shrugs, “The market is what dictates it all. The days of being discovered in some club by some A&R guy, who says, ‘We can take these people, and groom them, and make them into something .’ They don’t tend to do that anymore .Ten years ago, there was more quality control. The thought was [that] you made the best CD you could, and you marketed it to major labels who didn’t want to bet on signing someone and spending $200,000 in the studio and another $300,000 promoting ‘em [in order ]to manufacture a hit. They were looking for artists who had a decent product, who they could say, ‘This sounds good. We see potential. We either repackage what they’ve already done, or we can bring ‘em into the studio, but they already have proven that they can write, that they can arrange.’

“The game has always been about promotion and exposure, and a lot of things that needed Sony or Capitol or EMI. Now, there’s so much music available that distribution is tougher. There’s more possibility, but I don’t think it’s made it any easier.  You have to compete harder, have a better product and a more businesslike approach.”

Matt, smiling, shrugs. “I grew up with records, tapes, and CD’s.  You know, they’re tangible. My friends and I, we still buy CDs because it sounds better and we like it. We don’t want a download. Where’s the lyrics, the material? What are you going to look through while you’re listening to the music?”